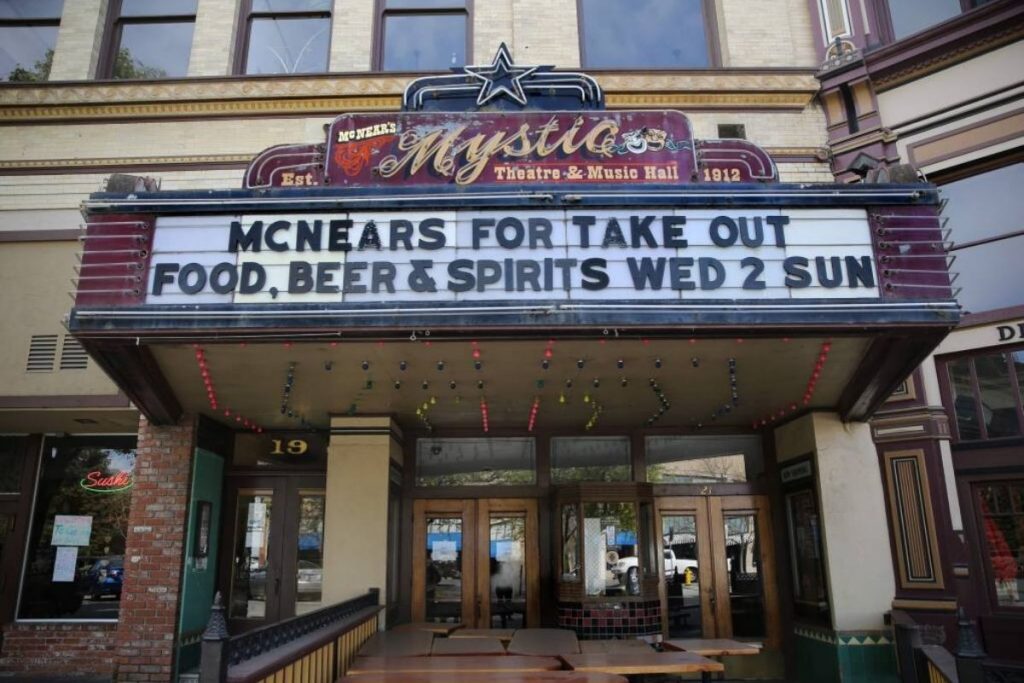 The Mystic Theatre is located in historic downtown Petaluma, California and is described by many as the North Bay’s Premier Music Venue. Built in 1911, The Mystic Theatre originally was host to live Vaudeville entertainment and in 1992 was renovated to accommodate live music performances for up to 500 guests. There is a full bar and restaurant access making The Mystic Theatre first choice for a great night out.

The McNear Building, home of McNear’s Saloon & Dining House and McNear’s Mystic Theatre is the legacy of the McNear family—a father and son team that towered over Petaluma for almost a century.

The McNears were as close as Petaluma would come to a dynasty. Businessmen, entrepreneurs, civic leaders and shrewd Yankee traders, John A. McNear and his son George P. are, by themselves, a history of Petaluma.

In 1856, just four years after a surveying team sketched out the Petaluma street pattern that exists to this day, John A. McNear came to Petaluma to seek his fortune. In ensuing years, it may have been said that instead, fortune sought him.

He started modestly, with a livery stable and a hay yard, but soon parlayed that into a shipping business. Petaluma, because of the river, was settled soon after the gold rush began.

Shipping begat more business ventures, such as shipbuilding, warehousing, banking and milling. And, for John A. McNear, the success of his enterprises led to civic involvement: bringing a railroad and electric lights to Petaluma, for example. He donated the land for Cypress Hill cemetery, and made numerous other contributions to the community.

John A. McNear, in 1876, needs a partner to operate his flour mill. He turned to George P., just two months shy of graduating from Petaluma High, who left school and joined his father.

Flourishing as they did, the McNears soon found they had embarked upon a major chapter of Petaluma history. A Canadian inventor, Lyman Byce, had perfected an incubator in a blacksmith shop across the street from the McNear mill. The McNears established him next door to McNear’s Feed & Seed, and the family financed other local families to go into the chicken business.

In 1886, John McNear built the building that today houses McNear’s Saloon & Dining House. In 1911, the building next door was completed. Today the two buildings are known collectively as the McNear Building.

George made additional contributions to the community, donating land for McNear Park, McNear School, the Petaluma Golf & Country Club, the fire station at 2nd and D, and more. Murals displaying the family’s history are located on the wall as you enter the restaurant.

The buildings were purchased from Mrs. Pope, the daughter of John A. McNear, Jr. (George’s son), who opened and operated the original Mystic Theatre in 1911 and maintained an office in the McNear building.

At the time of purchase, a motorcycle shop occupied the space which McNear’s Saloon & Dining House now inhabits, and the theater, called the “State” and now renamed the “Mystic Theatre & Dance Hall,” was a pornographic theater. Two other businesses occupied the first floor of the McNear building and one office tenant, a lawyer, Emmitt Dado, had an office on the second floor. The rest of the building was empty and boarded up at the time of purchase. Today, the building provides shelter for fifty-five thriving small businesses.

Their goal is to provide a community meeting , eating and entertaining spot for locals and fun-loving visitors to enjoy for years to come. And… in the McNear family tradition, put a little spare change in their pockets in the process. Thanks for your support!

New operators Push The Show came in 2016 with a renewed passion for bringing top quality live music of all genres to Petaluma. With strong ties throughout the surrounding Sonoma County, the new management continues to maintain Mystic Theatre as a base for community support and donates to charities, schools and has opened it’s doors to the community as a safe haven in times of need.